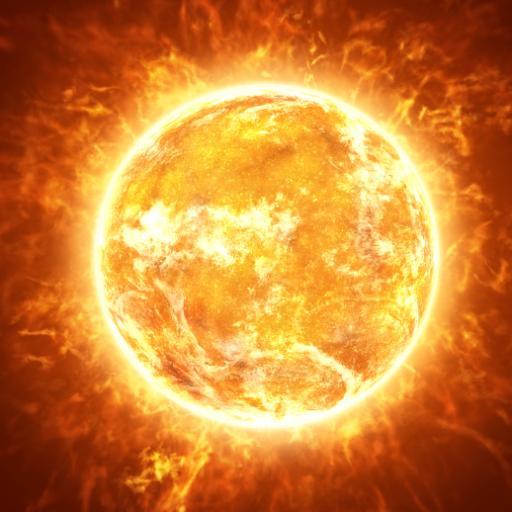 Look up to the sky on most days and you’ll see a bright yellow ball that we call the Sun. Without its heat and light nothing would exist on Earth, but what do we really know about it? If we look to the Bible, we find that God created the Sun on day four of creation:

So God gave us the Sun and it has burned brightly in the sky ever since, but how is that possible? To begin with the Sun is huge! It has a surface area approximately 12,000 times the size of earth and a mass approximately 333,000 times the mass of earth, and due to its massive size the gravity is about 28 times that of earth. so your weight would be about 28 times higher if you could stand on the surface of the Sun!

The surface temperature of the Sun in over 5500C (9900F) and its made up mainly of Hydrogen and Helium. Its mean distance from the earth is approximately 150,000,000km (93,000,000 miles) from Earth, which is said to reside in the Goldilocks Zone. But there are some remarkable aspects of the Sun that are really fascinating.

Let us look at the fuel of the Sun. As stated above, its mainly Hydrogen and Helium. The source of the heat from the Sun is the fusion of those elements. This fusion consumes approximately 600 million tons of material every second! And yet with all this material being consumed, the Sun remains as powerful today as it was on the day of creation! As it consumes these materials, the heat that it produces radiates outward towards the planets.

But in the zero gravity of space, the air temperature between the Sun and the Earth continues to remain far below freezing, while we on Earth enjoy basking in the heat of the Sun. If you set a heater across the room and turn it on, the heat will eventually radiate towards you and at the same time it will warm everything between you and the heater. The Sun, however doesn’t heat anything between the Earth and itself! Space remains freezing cold, while you lay on the beach enjoying the warmth.

And while our Sun seems large to us, its relatively small compared to other suns, or stars in the sky. It obviously looks larger due to its proximity, but in reality the Sun is a very small star. But God proves to us that size is not important. He gave us the perfect companion to allow our Earth to flourish Without our Sun in the perfect position, our world would be a barren landscape like the Moon or Mars, or any of the other bodies in our Solar System. All of them may have been capable of having life on them, but God chose to make Earth the perfect location.

But is the Earth the only planet with life? Are there other planets with life on them? Probably, in fact definitely! Will we ever have the chance to encounter life from other planets? Maybe, but I doubt it will happen for a long time, and by that time Jesus may have returned, and we’ll meet them on the New Earth.

During creation, God created many worlds and those worlds are out there waiting to meet us, but as sin dominated our planet, we are not ready to be with them. The time will come though and that will be a glorious time. Until that day though we need to celebrate the gifts that God gave us, and one of those is the remarkable gift of the life-giving Sun in our sky.