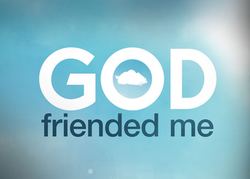 [Editor’s Note: This idea came to me as a suggestion from my wife.]

Judy and I recently started watching a new TV show called God Friended Me, the premise of which is an atheist podcaster gets a friend request from “God” on Facebook.  After that “God” sends him friend suggestions and each one turns into some sort of dilemma that Miles (the main character) must solve.  Its a really interesting premise and a very brave leap by CBS because like the show Manifest on NBC, they’re reintroducing religion to the mainstream media, something that has been avoided so as to be “politically correct.” Miles and his friends, while helping the people that “God” suggests, are also attempting to track down the owner of the “God account” and to try and determine why they’re being used.

We obviously can never find out who the real person or entity is behind the God account because that would kill the whole show.  We’re left to believe that it is God Himself who is reaching out to Miles in an attempt to bring him back into His fold.  Miles is forever skeptical over the ownership of the account because he doesn’t believe in God!

When I entered jail in April 2014, I’d have to say that I didn’t really have a proper understanding of my relationship with God.  I think I believed in Him, but didn’t consider Him to be an integral part of my life. I prayed a silent prayer to Him each night, but it was more of a routine than anything meaningful.  But going to jail changed all that. (Continued below)

We have hundreds of friends on social media platforms like Facebook, Twitter, Instagram, Snapchat, etc, but how many of them are your real friends and how many of them really care about you?  How many would do everything in their power to make your life right? Only God can and will do that.

He has done it for many people throughout history.  When Adam and Eve sinned in the Garden of Eden, He didn’t abandon them completely.  When the Israelites disobeyed His commandments, He didn’t abandon them completely either.  He gives us chances to make mistakes and correct them, and is there when we need Him the most.  When we begin to fail, is the time that He really shows us His power.

When I became a Christian in jail, it was noticed almost immediately, and other inmates would approach me with questions or for help in things.  I enjoyed being that person.  When I was released, I was unsure how people would react to my open Christianity, so I wasn’t fully open at first.  But now I wear it openly and proudly, and people have to accept that.

I am happy every day that God friended me.  No He hasn’t added me on Facebook, like in the TV show, but I know that He is there for me when I need Him.  I am thankful for Him throughout the day, when things go well and I call upon Him when I struggle.

God is my friend, and He can be your friend too!  Just ask Him.