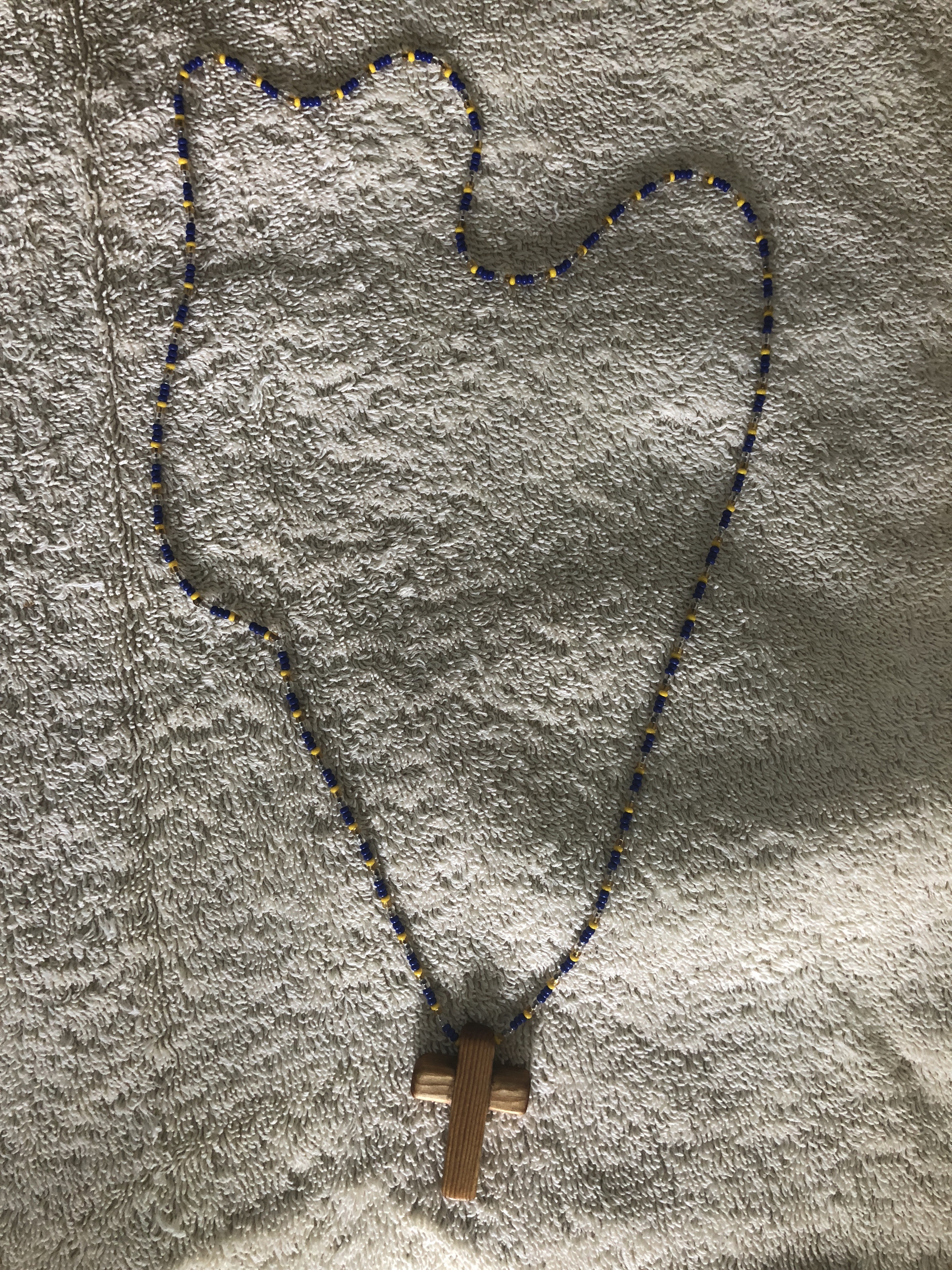 For a little more than four years, one of the first things I do in the morning is put a necklace around my neck.  Now this is not a gold necklace, and wasn’t bought in a store, but it is priceless to me, due to a couple of reasons.

For one thing, even though this necklace is very simple in looks, it has really special meaning to me.  But first a little history.  Originally I would not have worn a cross around my neck and couldn’t understand why anyone would, but as I dove into the Bible, my connection with Christ increased and I developed a real relationship with Him. And as I spent more time in jail, I needed to find things to do to keep me busy, so I took up “beading”.  I first decided that I wanted to make something for me that was functional and meaningful, so I purchased some blue and white beads and started to make a necklace for my favourite hockey team, the Toronto Maple Leafs and I think it turned out pretty well:

There’s actually two necklaces there, the first one has the keyring on it and it held the key to my jail cell around my neck instead of it being on a string. I took a lot of heat, and still do, for my support of The Leafs due to their poor performance, but I stand by them and wore my self-made necklace quite proudly for my whole time in jail.

But I was developing a much stronger relationship with Christ and wanted to proudly demonstrate that to the other inmates, but also wanted something that reflected me,  who I had become, and what was most important to me and the idea for a simple, but meaningful necklace came into my head.  It originally contained a combination of five different coloured  beads, but some have faded since then so I’ll include a picture of the five colours below:

So in this picture, you can see the five individual colours.  I’ll explain them, but they’re gold, yellow, dark blue, light blue, and pink. Each colour holds a special significance and the five together represent what is most important to me in my life.  I came to this realization while I was in jail, alone, and missing people.

And of course, the CROSS represents JESUS CHRIST.

Since I made the necklace, about 1/2 way through my jail sentence, I’ve worn it every day and when I don’t have it on, something is missing from my life. Very few people know, at least until now, how significant this necklace is to me, but it has deep meaning and I’ll wear it forever.  My one fear is that at some point, I’ll either lose or break it, but I hope that doesn’t occur.

I made a few other necklaces during my time in jail, some with some really interesting designs, and it really helped to pass the time:

All the necklaces I created are nice, but none of them has the deep meaning of the one that I wear every day.  Even though its faded a little, it still holds that special significance

I’m now going to make a special appeal.  If you or a family member suffers from mental health issues and you’d like to share your story (anonymously), please use the form below.  All information will be kept confidential and will not be shared with anyone. My goal is to set up a resource for people who are reaching out for help.  You can be part of the solution and maybe save a life.