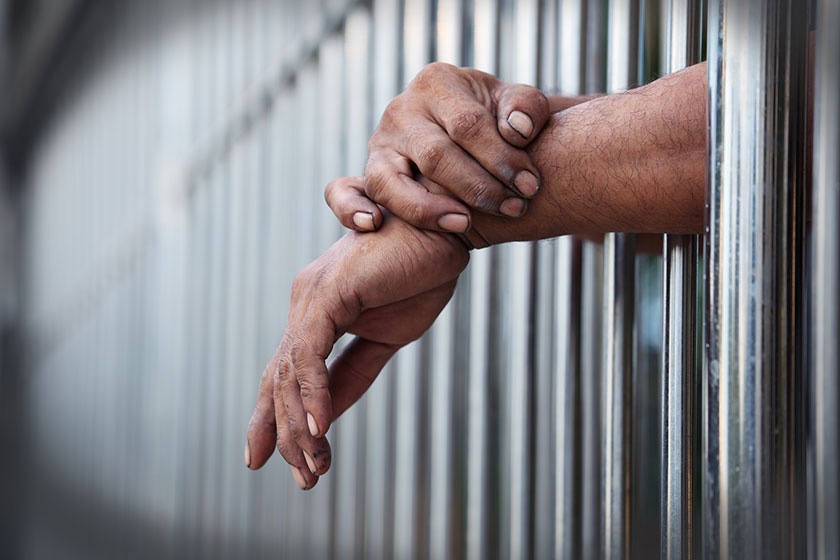 About midnight Paul and Silas were praying and singing hymns to God, and the prisoners were listening to them.

Being in jail was the most humbling experience in my life, until I became ill with Guillain Barré Syndrome (GBS). But in all honesty, although I wouldn’t admit it at the time, I belonged there. But many people are in jails or prisons who do not belong there, and that’s very sad. It’s a fact that many of these wrongful imprisonments have lasted for many years and I’ll never understand how they could survive that time knowing, and repeatedly expressing, that they were innocent.

In Canada we’ve had a number of these incidents where the checks and balances that are supposed to prevent this from happening have failed. David Milgaard spent 27 years in prison after being convicted of rape and murder! In 1997 DNA technology proves that he was innocent, and shortly after another man was arrested instead. Thomas Sophonow was tried three times for the murder of a donut shop clerk and eventually acquitted of the charge, but not until he’d spent four years in jail! Guy Paul Morin was found guilty of rape and murder of a 9 year old girl and spent 9 years in jail before DNA evidence cleared him of the crime. And the list continues. All of these men, and it’s mostly men, were tried and found guilty only to be exonerated at a later date, but not before they had spent years behind bars.

Contrary to some people’s opinions, jail is not a country club. For the most part you’re locked up with people who you’d avoid out in the real world, but in jail you’re forced to become “friends” because you have no choice. After leaving, although you promised to stay in touch, you disconnect yourself from those friends and never think of them again. As a guilty person you have a little in common with these people, if you’re innocent you know that you don’t belong.

I cannot imagine what these people go through living inside a cage for years, proclaiming their innocence. I had jail guards tell me that everyone in jail feels that they’re innocent, but these guys really were. They face separation from their friends and families, and in some cases, their families disowned them due to the crime. After being exonerated many of them seek and receive compensation from the government in multi-million dollar lawsuits. Our justice systems need to be more careful about how they convict people to prevent this from happening.

But there’s another class of society that is wrongfully imprisoned. Many prisoners have serious mental health issues. I can think of three people I met in jail who suffered from mental health issues who were placed in jail instead of getting treatment for their illness. There was a man who was known for eating in restaurants, some of them five star, and leaving without paying the bill. At last count he’d been convicted over 200 times and jailed each time. Obviously jail wasn’t working for him. Another man I met didn’t even know he was in jail. He kept trying every door in an attempt to get outside for a cigarette. He went around the unit trying to buy a cigarette from the other inmates, even though both money and tobacco are contraband in jail. And there was a young man, just out of his teens, who had a violent temper. He’d get mad and bang his head against the walls and kick doors. The guards would lock him into his cell, but they’d have to keep going in to stop him from hurting himself. All of these men, and many more should have been treated for mental health issues instead of being removed from society and placed in jail.

The Apostle Paul was wrongfully jailed because he preached the new Gospel about Jesus Christ. His message was in stark conflict to the message that the Jewish leadership was preaching. But it didn’t stop Paul from spreading the news. And even when jailed, Paul and his companion Silas would continue to reach out to people by singing hymns in jail. Paul never stopped spreading the message until his death, reportedly by beheading in Rome. He died as a result of the message he preached.

Sadly there are probably others who’ve been executed wrongfully in countries that still practice capital punishment. We can only hope that these people receive the blessing of God and will join him in heaven.

My seven months in jail was difficult, but I could see that my time behind bars was ending. But some wrongful convictions carry a life sentence behind bars, or worse, a death sentence. Ultimately, however, we’re all sentenced to death for the sins we’ve committed. Only through repentance and following Christ can we get freed from our death sentence. Seven months or longer may seem like a long time, but it’s short compared to eternity. God wants us to be with Him, and our worldly crimes won’t keep us from joining Him, as long as we know and love Him.